Nearly 10 years ago Sharrow Vale Community Association worked with SCC and Marks & Spencer to save a plot of land in the neighbourhood from been converted to parking spaces.  With several rounds of local consultation, the Sharrow Vale Pocket Park was developed.  It involved removing a dying cherry tree and creating a seating area, a bee-friendly plant area and a work of art in the form of a balustrade.  The plot is maintained by volunteers from the SVCA (and NESST) and AMEY. 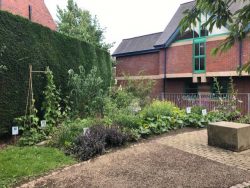 The balustrade holds a multitude of features that try to represent the meandering River Porter and the wildlife that it supports and has several information panels that narrate history of the locality.  It also holds a very small secret that we are not at liberty to divulge, but you must discover instead. 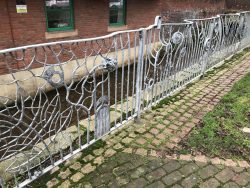 A few years later, with contingency money that was set aside for any improvements that may prove necessary after seeing how the park was used and how popular the spot was, more seating was installed near the telephone box.  Unfortunately, due to graffiti, the budget was also used to install CCTV.  However, the pocket park continues to be a popular spot to repose in a built-up environment; to stop and listen to the babbling River Porter and to spot small brown trout, lately grey wag-tails and even a kingfisher! 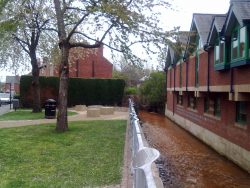 In 2020, with lockdown giving volunteers more time, the bee-friendly area was re-invigorated to incorporate ‘Veg round the Edge’.  In an

attempt to encourage everyone to have a go at growing something they can eat, even if you only have a back yard or window box, vegetable seeds were sown at home in mushroom and margarine pots, potted on to the next size and then planted out in the pocket park when the frosts had passed.  Each was signposted with details of how simply they had started, when they were planted in the Pocket Park, how long they would take to grow and even suggestions for how you could eat them.

It was never going to feed the 5000, but the amount of love and feedback the volunteers received from passers-by was touching.  It was truly satisfying to see 4-year-olds being able to recognise a carrot from its leaves rather than the orange part, for them to measure how tall the bean plants had grown since they last visited and for them to pick a courgette (no doubt well before it was ready) to eat later. 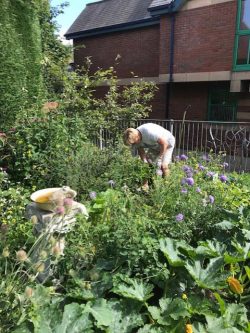 Please do visit this gem, discover the features of the balustrade and enjoy seeing the beauty of bees, flowers, vegetable and wildlife…while you eat your fish and chips.